The following market research report sample dissects Metro Vancouver’s density of dentistry practices. The objective is to understand which areas in the cities of Vancouver and Burnaby are the most underserved and overserved regions.

The research intent for this study is to conduct a comprehensive analysis of the spatial and density landscape of dental offices in Burnaby and Vancouver to uncover key insights into the underserved and overserved regions of both cities. This market research report will include a survey of all dental offices and practicing dentists in key neighbourhoods in Vancouver and Burnaby, and identifying the top five areas that are underserved in Vancouver, and the top four areas that are unserved in Burnaby. The report will also look into major development and urban growth trends, spatial and urban planning layouts and population growth trends in both cities to create a comprehensive forecast of growth trends in both cities.

In 2020, there were 27,869 established dental clinic units in Canada, employing up to 106,250 Doctor of Medicine (DMD) and Doctor of Dental Surgery (DSS) professionals. According to Ibis World (2021), the dental industry is expected to grow at a stable rate, driven by increasing awareness of good oral health and studies proving links between preventing and treating other diseases such as diabetes, heart disease and oral diseases with good oral hygiene. Industry revenue is expected to grow at an annualized rate of 2.9%, increasing to 18.7 BN by 2025, and the number of industry enterprises is expected to increase at an annualized rate of 2.6% to 30,243 by 2025. Another trend worth noting is the growth of mobile dental clinics emerging as a trend opposing the traditional brick and mortar dental practices.

In Canada, Ontario and British Columbia have the highest dentist to patient ratio. In the lower mainland of British Columbia, rapid population growth, expansion of new urban centres, and large health authorities such as the Fraser Health Authority and Vancouver Coastal Health have supported the growth of independent, franchise, and limited liability companies (LLC) and partnership dental practices. Over the next five years, forecasts predict the dentist-to-patient ratio will rise due to increased competition and fluctuating demand from consumers.

Currently, there are 2,606,000 people living in Metro Vancouver. The city has an annual growth rate of about 35,000 per year, with the majority of growth occurring in urban centres or suburban areas in close proximity to Vancouver. The ‘Burrard Peninsula’ area, composed of Vancouver, Burnaby, New Westminster and the UBC Endowment Lands is forecasted to grow from 1.04 M to 1.6 M by 2050. While this region is the largest, it is experiencing only modest growth compared to other areas such as South Fraser – East and West, which are expected to grow to 1,185,100 and 441,300 respectively. As of the last 2016 Census, Vancouver-proper saw a 5.9% annual growth rate, and Burnaby saw a 4% annual growth rate.

The dataset used was taken from Yellowpages.com to determine the number of listed dentists and dental clinics. Each dental clinic was checked to ensure the correct number of active practicing dentists were captured per clinic and cross-referenced by a research assistant or the lead consultant. The spatial boundaries were taken from the City of Burnaby Website, and the City of Vancouver website, and the boundaries of each area were defined from Wikipedia or GoogleMaps [See excel sheet for spatial boundary definitions].

Vancouver is divided into twenty distinct neighbourhoods. The dataset used was the 2016 Census, which stated there were 608,575 people living in Vancouver, with 454 active dentists. The overall ratio of dentist to patient ratio of Vancouver is 1:1,340.

As seen in Appendix 1, the most populated neighbourhoods are Downtown, Renfrew-Collingwood, Kensington Cedar Cottage, West End and Kitsilano. The areas with the most dentists are Downtown, Kensington-Cedar Cottage, Fairview and Kitsilano and the West End. The data shows that in Vancouver, the number of active dentists in an area closely mirrors population density. Fairview is an outlier since Vancouver General Hospital is in the area, which may be responsible for the increased density of practicing dentists.

As seen in Appendix 1 the areas with the lowest dentist to patient ratio are Sunset, Renfrew-Collingwood, Dunbar Southlands, South Cambie and Victoria-Fraserview. A decision-making criterion in Appendix 2 was used to determine the best neighbourhoods in Vancouver with a weighting of Population (.2), Density (.6), and Income (.2). As seen below, the top neighbourhoods for a dental clinic based on these metrics are Sunset, Renfrew-Collingwood, Dunbar Southlands, Victoria-Fraserview, and Killarney.

The city of Vancouver has made major commitments to growing the urban capacity and business economy in key areas in the City. The City of Vancouver’s ‘Major Planning Projects’ are large-scale projects that seek to enhance the livability, economic vibrancy, and population density in key areas in the city. All major planning projects include both residential and commercial units, as well as accessible public transit and green space. As such, the below areas will likely be areas of strong urban growth, increased traffic, and business visibility in the next ten years.

Based on the analysis and research, it appears that major development areas such as Oakridge Centre Redevelopment, the Broadway and False Creek development plans are in areas that have strong existing competition for dental practices. Area’s such as Sunset, Killarney and Victoria-Fraserview are within close proximity, or located within major planning project boundaries and are therefore likely to experience the most significant growth in upcoming years. Specifically, the Sunset, Victoria Fraserview and Killarney areas are located in South Vancouver where recent urban development, supported by the Cambie Corridor plan, has taken off in recent years. As such, the top recommendation for opening dental practices within Vancouver are in the Sunset, Killarney, and Victoria-Fraserview neighbourhoods.

Burnaby is divided into four distinct quadrants with four urban centres within each quadrant. The majority of Burnaby is suburban, with key urban areas serving residents that live within close proximity to provide access to key necessities such as grocery stores, medical and dental offices, and recreation. The 2016 Census stated there were 232,755 people living in Burnaby, with 125 actively practicing dentists. The overall ratio of dentist to patient ratio of Burnaby is 1:1,862.04 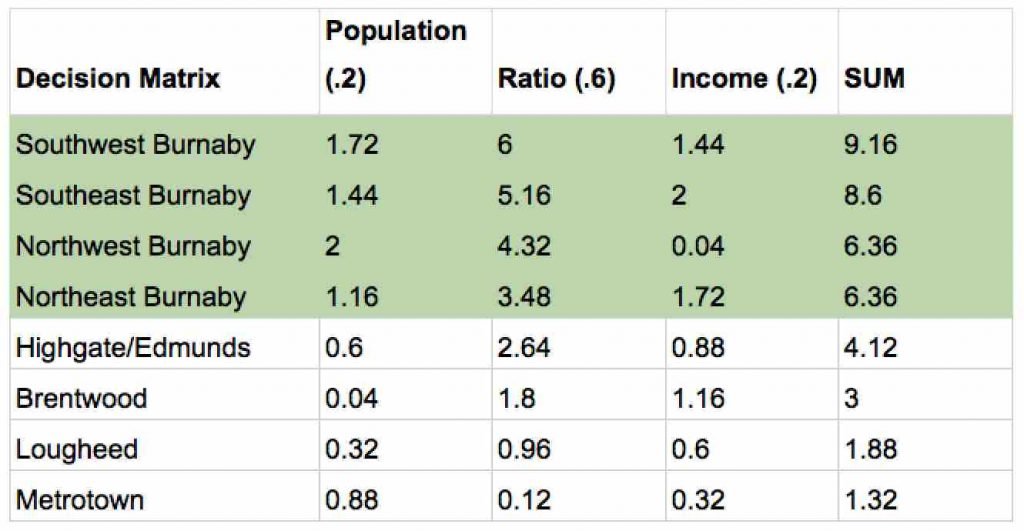 Burnaby has four main town centres composed of Metrotown, Brentwood, Edmonds, and Lougheed. Approximately 34% of residents live within the town centre, with 66% living in residential neighbourhoods. The City of Burnaby has varied zoning laws, where designated areas such as Town Centres, Urban Villages, Mixed Use Areas and Suburban Multi-family areas determine the spatial layout and zoning for each area (Burnaby.ca, 2020). Differing significantly from the City of Vancouver’s planning, the City of Burnaby instead has key centres within each quadrant of the city. This impacts the urban business growth of Burnaby, as the majority of businesses are required by zoning to operate either in Town Centres or Urban Village developments.

The City of Burnaby has many ongoing development projects with a focus on multi-family residential housing units in urban centres such as Edmonds and Metrotown, as well as along high volume travel nodes such as Hastings St and Royal Oak Avenue. The City of Burnaby is approving a high number of high-rise office buildings, mixed-use commercial-residential spaces, and multi-family residential developments in an effort to enhance livability in key urban centres and subsidiary areas (Planning Department, 2021).

While the decision matrix indicated that opening dental clinics outside of urban centres in Burnaby, consideration of the urban planning and unique zoning of Burnaby alters the recommendations for optimal dental practice locations. When looking at the decision-making criteria, Southwest and Southeast both performed well, with key urban centres being Metrotown and Edmonds. Metrotown has the highest dentist-to-patient ratio, however, subsidiary areas such as Royal Oak, which borders Metrotown and Edmonds fall within the Southwest boundary, is located within an underserved geographic area. Edmonds as an urban centre scored the highest out of all urban centres, meaning it may be an attractive prospect and underserved comparatively as an urban centre. Hastings St, which is located in the Northwest Quadrant is also a strong prospect. Hasting St has been identified as an Urban Village, and within the Northwest Quadrant, which scored third-best on the decision-making matrix.

This market research report set out to discover key trends in the dental clinic landscape in Vancouver and Burnaby. For Vancouver, it appears that the most underserved areas are in the southeast quadrant of the city. Complimenting recent major planning projects such as the South Vancouver River District and South Cambie developments, dental clinics in this area may yield strong profits over time and thrive in an area that is currently underserved.

For Burnaby, a suburban urban planning layout concentrates commercial zoning and development in key town centres and urban villages. While the most underserved areas in the city were in the Southwest and Southeast of the city, it is more beneficial to consider opening dental offices in the key town centre and urban villages in these quadrants, namely in Edmonds, Royal Oak, and along Hastings Street. 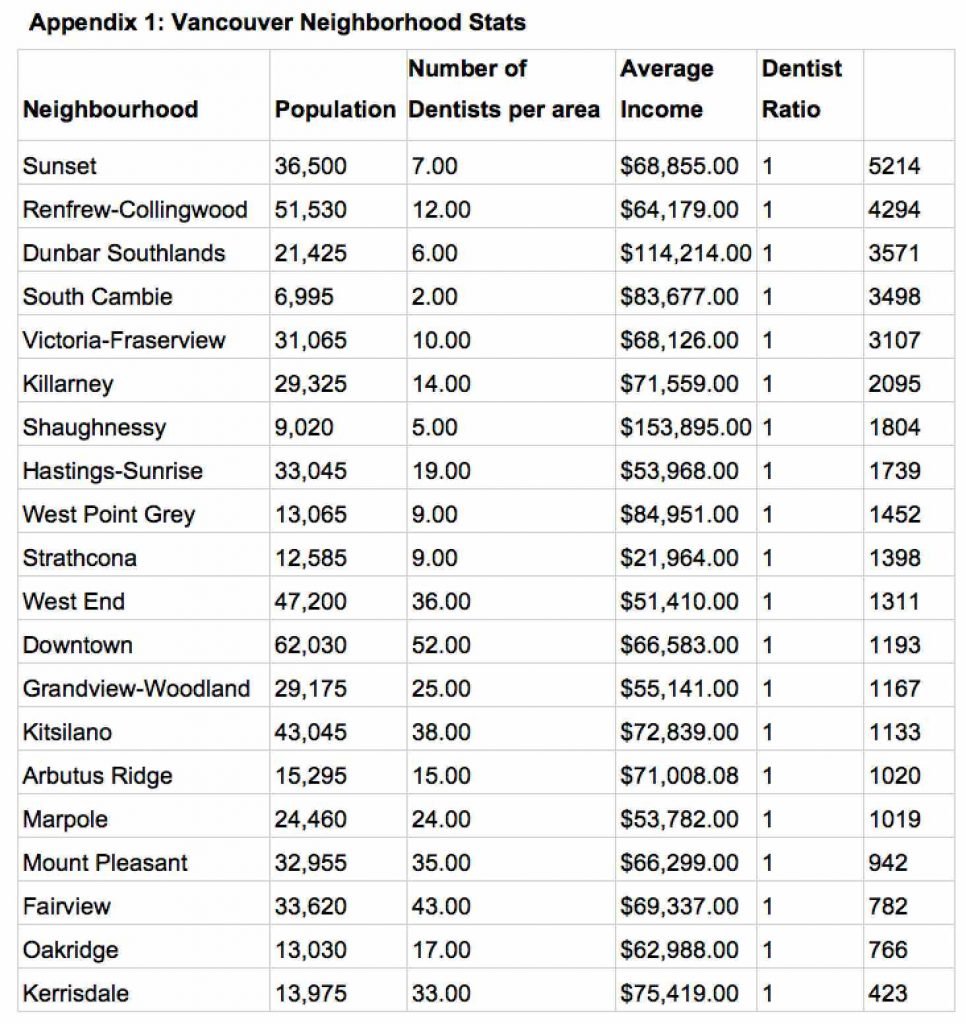 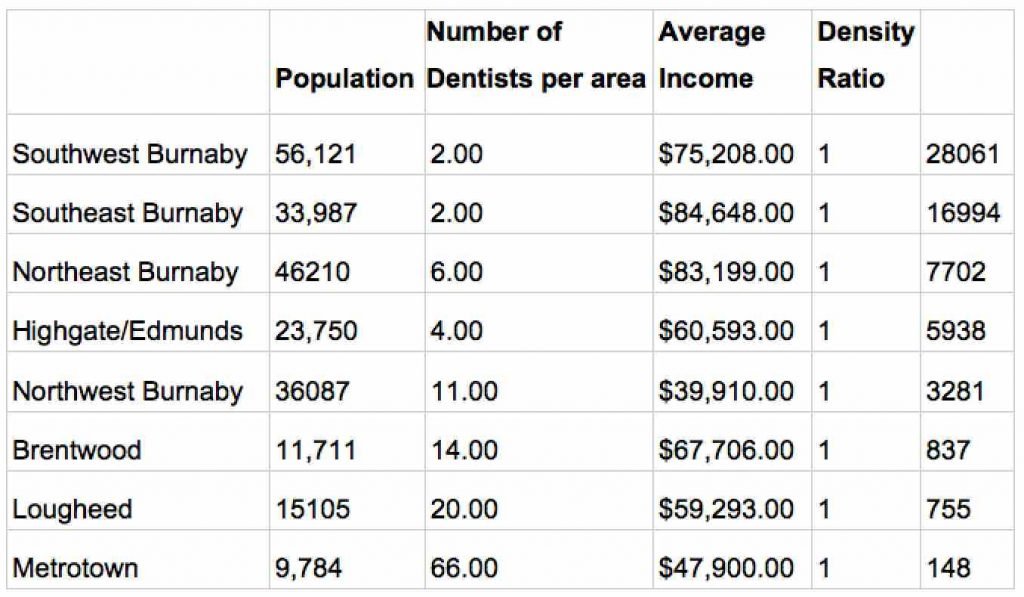 How can we help you?

Get in touch with us or visit our office